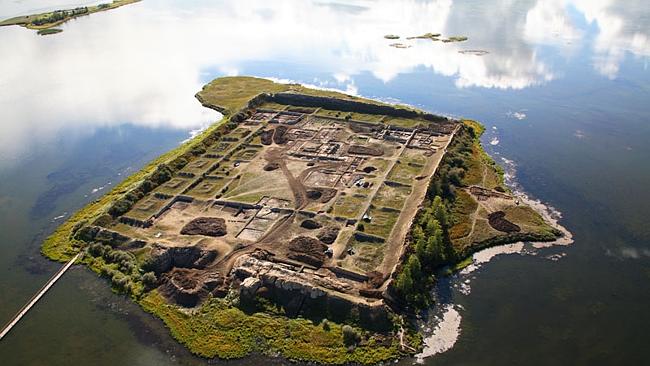 ON A small island in the middle of a remote lake in Siberia lies a puzzling sight.
Welcome to the Por Bajin (also spelt Por-Bazhyn) ruins, located between the Sayan and Altai ranges, close to the Mongolian border. It’s an area almost completely unaffected by civilisation.

And nobody knows exactly what the Por Bajin is.

While it looks like a fortress at first glance, with its towering walls and foreboding shape, not all is as it seems. Experts believe the 1300-year-old structure actually contains a summer palace and a monastery. But nobody has been able to prove it.

While the site was first explored in 1891, it wasn’t until 2007 that proper research took place, the Siberian Times reports. They discovered a distinctive Chinese influence — from the use of certain roof tiles to the building methods, further adding to the intrigue.

The Por-Bajin Cultural Foundation, the official site for the complex, outlines some of the main questions that have yet to be answered: “Apparently, it was built at the period of the Uighur Khaganate (744-840). But it is not clear what did they build a fortress for in such a solitary place — far from big settlements and trade routes.

“It is also unclear whether Por-Bajin was a defensive structure, a Buddhist or Manichaean temple or a summer residence of Khagan. There is even a version that there was an ancient observatory in it. The architecture of the fortress also produces many questions.

“It has been unknown for long whether the structure was built on the island or the lake was formed later, around the already built fortress.”

Intriguing! Nice mystery, I feel the need to google

Methinks they left due to the pulling of funding for the site, or that the celestial event they were to track was over, so they left.
_________________
Warning!: Those who knock on Dragon's doors un-announced may be flame broiled, unless they bear chocolate/wine, or good foods

Mysterious indeed. Why would one build a fortress in the middle of a lake? That make no sense so it must have had another purpose.