Link to the article:  https://historyofyesterday.com/chernobyls-blown-up-reactor-4-just-woke-up-74bedd5fc92d

The spooky thing is, a few weeks back I just watched an episode of the TV series Chernobyl a few weeks back after coming across a repeat showing of it by chance while I was flicking through various TV channels, and in that episode the USSR authorities and emergency services were fighting to stop a second, much more massive explosion at the reactor, which would’ve been catastrophic for Europe if it had happened. Off the back of watching this I spent part of a night Googling the Chernobyl timeline, since I hadn’t previously been aware of the danger of a second explosion there, and being massively glad that such an explosion hadn’t happened. Hope this doesn’t mean something like that could still happen after all! :-/

Some say it can explode a second time if the reactor ignites again...

I have a friend from Poland who became infertile due to the radiation her town received from Chernobyl. It has affected people in other countries too.

I am not a fun of nuclear energy.

Really sorry to hear that this happened to your friend, that must be a horrific thing to have happen :-/

I was too young to know what was happening when Chernobyl originally blew up, but when I got older(Maybe 10/11/12 years old, maybe early teens, I can’t remember) I noticed these big tins of powdered milk in the kitchen cupboards from years earlier, and I asked my mum why they were there; she told me that when Chernobyl had blown up there had been such a scare about the milk from local farms being radioactive that my parents(As well as many other people) had bought supplies of powdered milk as a precaution, and because the milk from local cows had turned out to be OK for drinking after all, the powdered milk had ultimately not been necessary.
But hearing that gave me at least some idea about the scale of the disaster and the repercussions of it.

If that reactor explodes again it would be the last thing anyone needs, especially after the last 18 months with the pandemic!

I totally agree, I think nuclear energy is a bad idea, and the dangers of it completely outweigh the benefits. I think it’s the scientific equivalent of playing with fire. I wish we’d just stuck to other ways of producing energy and electricity.

I’ve started keeping an eye on any possible news articles about it, a Google News search seems not to show anything alarming, for now at least.

Here’s a picture I found online of the fallout zone from the original 1986 explosions: 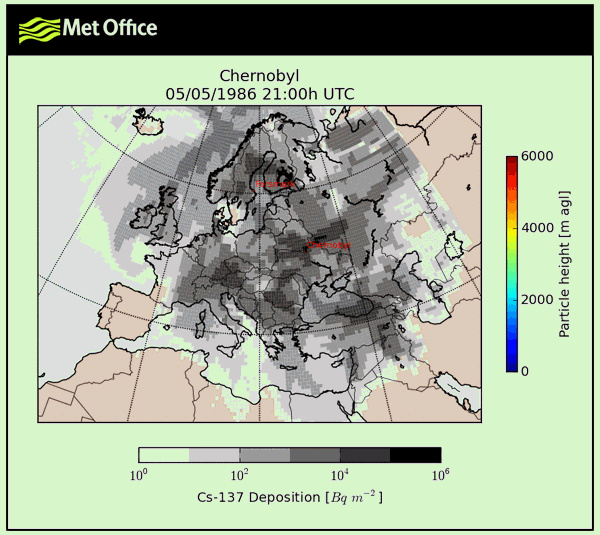 Basically, apart from the places in the vicinity of the disaster itself, Europe copped the full force of it.
Spain and Portugal were pretty lucky.

Wow, very interesting.... and easy to believe as Chernobyl is right next to Europe. I am actually glad I was in Argentina when this happened.

Let us know if you ever see any news about reactor 4.

It was originally a gif showing the timeline of the spread of radiation from the explosions on 26th April 1986 up till that date on 5th May, which was even better! But when I tried to upload it, all it posted was the photo :-/

Yes, Argentina was nice and safe! It’s actually a bit worrying to see this map of Europe and see how relatively close Chernobyl is to the UK, especially when I live in one of the UK’s most easterly cities!

Yep, if I come across any news about Reactor 4 I’ll post it if it hasn’t been posted here already(Bearing in mind you’re the one who started this thread and made me aware of the new developments regarding the disaster site, LOL!).

I did just come across this video on YouTube which was made by one guy after he visited Reactors 3 and 4 last summer, and posted up earlier this year, so fairly recent:

Nuclear, not so green and safe as folks think. Thorium if they finally get it to work will be the safer method.
_________________
Warning!: Those who knock on Dragon's doors un-announced may be flame broiled, unless they bear chocolate/wine, or good foods

Just came across this video, which I found interesting:

A bit dramatic, but I think there’s some decent info going on here too.

It focuses on the New Safe Confinement keeping the rain away from the original sarcophagus around Reactor 4, and the corresponding knock-on effect which this has been having on the radiation levels.

If the summary of what’s being said here is true, it’s actually more reassuring than scary... Within reason!

Looking at the maths did not make it easier for me!!! LOL


You are right, it is reassuring because they scientists have always expected small reactions but really the dangers of another event like the one in 1983 is reducing as we speak.

The maths in that video is on the complex side, yeah! But I know what they’re meaning, many times in the past I’ve observed moving objects banging into still ones and starting them moving, and appearing to transfer all - or most - of their kinetic energy to the object they hit. (Pool balls is a great example to use, many times I’ve watched this happen while playing pool!)

Yep, I’m hopeful that the scientists working there and monitoring it have got things under control and that we don’t really need to worry about it… I’m hoping! LOL

Chernobyl  has always been mistaken and interchanged with Mugwort, both indigenous to Poland

i wish i could add some diagrams illustrations ans scholars here ,,, i dont know how

7heHe4rt
the creation, bioweb not virtual not for the fallen greedy to adjust dials knobs or frequency

many have asked me if the covid and viruses could be radiation poisoning?

of course ... lowered immunity to all elements results from certain radiation

ive been in forests jungles and  mountains
ive spoken to the animals in person seen them beg me to do something ... drawing on my clairvoyance and empathy
whilst ppl are unaware

in 74 my dad an aerospace physicist and computer engineer [like many around me in childhood] co created the public internet .... i asked it be equally distributed

a young kid
unaware its killing earth
nonetheless ... i reversed course and say; those who dont know havent looked, everything was made available

i cant name specific chemicals without notes
but remember this
susscreen was unknown before chernobyl
it was called suntan oil ... a lotion to aid tanning not to screen harmful UV
which was still at low levels then

despite the hundreds of tests on earth
https://www.youtube.com/watch?v=LLCF7vPanrY

these test have very deep mystic value to that niche but in practical math and biology supposedly little as the elements dissipate
[though they dont]
note its modern white nations getting zapped by radiological weapons of fertility killing frequencies
men have no sperm women have no breasts the bodies changing ...

remember the promise of a new world ?
system or planet ?

Those last 2 posts look like they might’ve been sent from the Chernobyl exclusion zone, because they look pretty badly mutated.

THEY ARE ALL LINKS TO SOLAR CHANGES ON THEIRTUBE VIDEOS