If you've been feeling a strong urge to howl lately, there's a reason why: A full "blood moon" is coming Oct. 8. Just check out the NASA video above.

All werewolf jokes aside, the total lunar eclipse will be the second -- and final -- "blood moon" of the year. It will be visible in the United States and Canada early Wednesday morning, with better viewing for those in the western part of the continent, as indicated in the map below.

Full lunar eclipses are often called "blood moons" because of the reddish tint they adopt as sunsets and sunrises seen from Earth reflect onto the surface of the moon.

Because this eclipse will happen two days after a lunar perigee, which is the point when the moon is nearest to Earth, NASA says the moon will appear 5.3 percent larger than the previous "blood moon," which occurred on April 15.

Excellent! Thanks for posting this, Rogue

Thanks for posting, Rogue.

Aye it is but we are gettin' a nasty storm coming through then mate. Nor'wester building up now.

It should be at full eclipse here around 4:15 am... the way things have been going, I should be very awake to see it. However, it's supposed to be overcast and rainy so who knows? I'll give it a shot anyway

You must photograph and report!!

I'll try to get a pic if'n I can. Depends on the weather.

Hello moon chasers, I have been chasing too..

I managed this one out of so many, but its clear I am happy.. 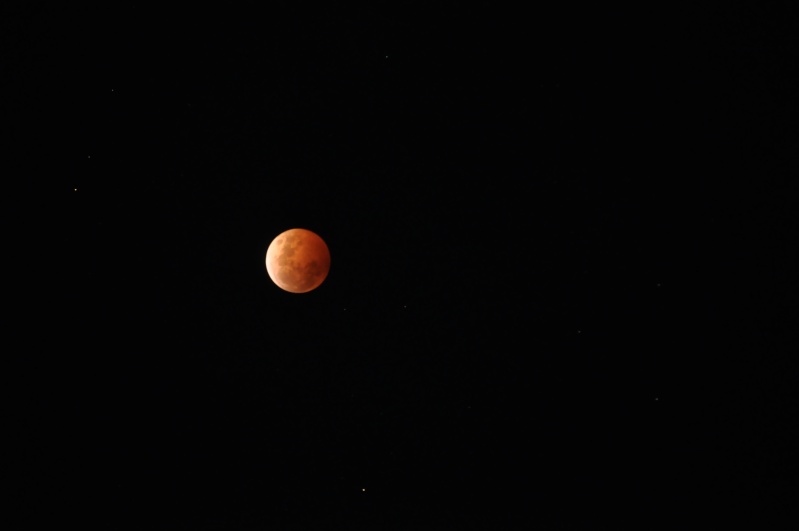 You can see some stars too, that is a bonus shot!!

Hey nice Nami!! I went for a walk but still no see. Should be higher in the sky soon... fingers crossed its still red

...I got up extra early to give it a try but it's quite overcast here so no luck *sad face*

It was dark clouds when I started out, her rising was normal hidden behind them. I stayed out over two hours and finally the eclipse began just as I was finishing up around nine thirty or so..