I'll start by posting the article I have already posted, so that everyone has a chance to read it.

And I'll reply here to Lion: they are working on a vaccine right now but even if one of the batches is successful by the time they do clinical trials, they approve it and they start producing millions of doses, a good year at least would have passed.

I also wanted to add: there is a lot of misinformation going around due to Barnacle Head Trump and a possible cure for Coronavirus. He twitted to the public saying there is evidence a known malaria drug (Chloroquine) can cure CV and that's not true.

I can discuss here why there is no evidence, and I can discuss the tiny study he (Trump) based his info on ( a poor  study of only 20 people, where four died and were not even included in the final results).

I can also read and discuss any other articles or studies you guys may have. Let's beat this with common sense and science, not quackery.

Nice to have an official thread to discuss it!

I’m surprised Trump hadn’t been called a quack already, but at least it’s out there now.

That’s one thing which bugs me about this virus, and has done for ages: The lack of knowledge about it, and the amount of conflicting info and misinfo flying about. I’ve been careful about sticking to what I think are reliable sources when checking for updates, but things still seem pretty confused.

Oddly enough, my roommates caught something earlier on, and they had similar symptoms to Corona, I tended to isolate myself most of the time, but was in the areas they were in and closer than 2meters apart.

I had in November, flu and pneumonia shots at the same time, and I am a O type blood type. Now if true, I have evaded the symptoms and if resistant, thee is an ironic twist to this. If I even have resistance to it, my blood has a problematic attachment.......Red Cross has me listed as a possible Mad Cow carrier for the past few decades.....
_________________
Warning!: Those who knock on Dragon's doors un-announced may be flame broiled, unless they bear chocolate/wine, or good foods

Lion, it's not easy to find good sources regarding CV because there is so much rubbish around! Even proper scientists are still studying it.

Len, many people I know (including family members) had a really bad flu back in November/December too. A professor at Oxford university wonders whether that was already Corona and have asked the government to test everybody for antibodies to see if it was.

I know someone who works in a pharmacy and today they told me they have received a government letter saying to prepare their stock because the lock down may last until August!

Hi Ags, maybe you could comment on this article from Australia..

@Agartha wrote:Lion, it's not easy to find good sources regarding CV because there is so much rubbish around! Even proper scientists are still studying it.

I’m guessing this is also a result of social media being involved? I know the amount of BS being posted about Covid-19 on Twitter has been ridiculous, for example!

Rogue, that's the drug I was talking about (see above). Chloroquine/Hydroxychloroquine have been effective with some autoimmune disorders (like lupus) and even some viral infections. But, big but, we don't have any evidence it works with Coronavirus.

There has only been one study, in France, very small and very dodgy (there was no control group and the four patients that died were not included in the final results). We need lots of large clinical trials which will start happening in several countries (I know Argentina is one of them and I think Australia too).

China also did another small study (30 people) and it was done better than the French one (it was randomised) and the Chinese study did not find any different outcome between the two groups (the one that received Hydroxychloroquine and the one that received a placebo). So as you can see we don't have any positive evidence.

I really hope the clinical trials will be succesful, but I have more faith in a vaccine. I hope I am proven wrong.

I haven't heard about that one! I don't even know this drug, Ivermectin! I will research it tomorrow and reply properly.

But, always bear in mind that when something works in a petri dish it usually means nothing. Same when new drugs work well with mice. Only the clinical trials can give us a good indication... looots of (large) clinical trials.

One of the nursing homes in Calgary has 65 covid patients.

In a Glasgow care home 13 residents have died so far, one after the other, due to CV.... and I agree, K... everybody is feeling really down

This graph is from yesterday and it shows the curve flattening for Italy and Spain. Not clear about which way the UK is going. US doing really bad. And South Korea was the example everybody should have followed!! 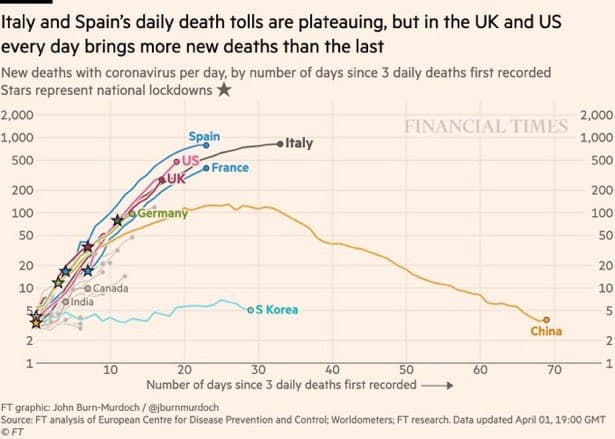 I just realised I posted the wrong graph, the one above is 1st April, this one is from yesterday (similar trends anyway): 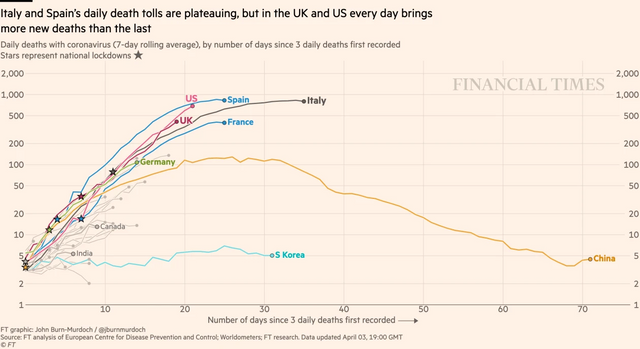 Rogue, regarding your last article:  Ivermectin is a veterinary medication, that's why I've never heard of it. Apparently it has horrible side effects but it has been used in humans to treat parasitic blindness in Africa. I will have to look for studies regarding that, if any is available. I'll come back to that.

Cheers Ags!! I'll be interestred to hear what you may find.

Yes, Rogue, the deaths in the UK (most are in England) are very high, today 600+ again (Scotland only had 2 I think). The numbers in Australia are good compared to other countries, but you have something that helps: you have lots of land and not as crowded as they are in Europe.

So, I was reading about Ivermectin and it's actually safely used to treat intestinal worms and as a cream to treat rosacea (but I have never used it).

CoVid19 hooks up to a protein and this protein transports the virus to the nucleus of cells (where it multiplies and spreads around the body). Ivermectin manages to block that specific protein, which means the virus cannot reach cells nucleus and cannot reproduce. But this has only be observed in a petri dish, which may mean nothing. Scientists will now try this 'in vivo', in animals (I fell so guilty about this actually

). If it works with certain animals then they can move on to clinical trials with people.

Just like with the vaccine it will take at least a year an a half (minimum) to get Ivermectin approved to be used to stop CV).

Wow, thanks for these graphs, they’re very helpful in illustrating how each country is doing!
The Ivermectin article shows some promise, but it’s frustrating all these processes(Development and approval of vaccines and medicines) takes so long - wish they could speed them up.

Well, a lab technician earns £2 K a month (same as a nurse). A footballer earns a million a month. Perhaps we should actually start paying better those that actually do something valuable, eh?

Speeding things up when it comes to medicine will only lead to fatalities and not identified side effects.

@Agartha wrote:Well, a lab technician earns £2 K a month (same as a nurse). A footballer earns a million a month. Perhaps we should actually start paying better those that actually do something valuable, eh?

They should definitely do this... Swap the salaries around!
I’ve felt for a long time that all of those working in labs and hospitals aren’t treated and paid well enough.