So sad... Italy, Spain and New York are all places very close to my heart.

Yes, the situation is terrible in New York..... mass graves... never thought I would see anything like that.

For me, personally knowing people with CoVid19 (and a death), it has become too real... and scary. But I have faith they will create a vaccine in the near future... we just have to hang on a bit longer.

Yeah, sounds like that would feel too real - too close for comfort. Guess you’ll be glad to be off now!

And yep, it’s a waiting game till a vaccine is eventually ready - I’m also hoping it’ll be sooner than later! I have faith in science

I told the family that as soon as the nightmare is over I'll order some imported meat from Argentina and we'll celebrate with a big bbq!!!

Today, not good news for some of us: all other countries are seeing a big decline in numbers of cases and deaths, but the UK and US are still spiking... 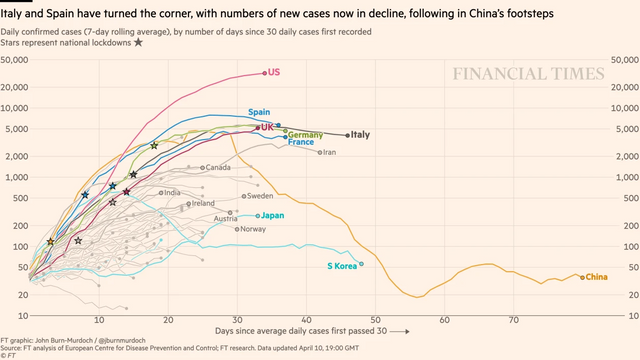 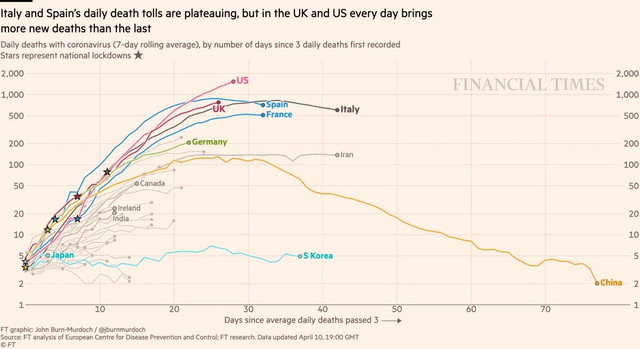 That is very sad news. I feel for you all and I truly hope there will be a shift to some more positive numbers very soon. Keep yourself and your family safe Ags.

Thank you, Rogue.... a study done by The Guardian predicts 60+ thousand deaths in the UK by end of Summer and I hope they are wrong.

So sorry to hear about Indonesia. Poor countries are going to suffer so much more with CV... Brazil today reported 1000 deaths.

OMG! I'm excited about this and I really hope the vaccine is effective and they really manage to make it in 6 months!

Thanks for the share, great article!!
I’m not actually too surprised that a vaccine might be ready so soon, as it’s amazing what science can be capable of, especially these days. But it is a massive relief, and maybe the first real light at the end of the tunnel!

Yes! The first real light at the end of the tunnel!!

The scientists are quite positive the vaccine will be a success and I really hope they are right.

They're saying that only 20% of Alberta households still have two incomes coming in... the rest have been halved or disappeared entirely

Yep, same here. A record number of people have applied for benefits (welfare) but if you have a mortgage you won't get help to pay it (like if it was a rent) and I know a few desperate people right now.

Some of us are really lucky to still have our health and an income.....


Number of cases seem to be dropping in every country, including the UK. 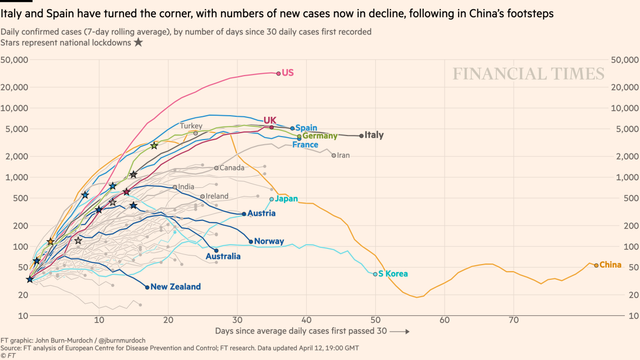 First article is WTF? Three days ago he was in intensive care, he tested positive 9 days ago and now by magic he is negative? This add to my theory that he was never sick in the first place: 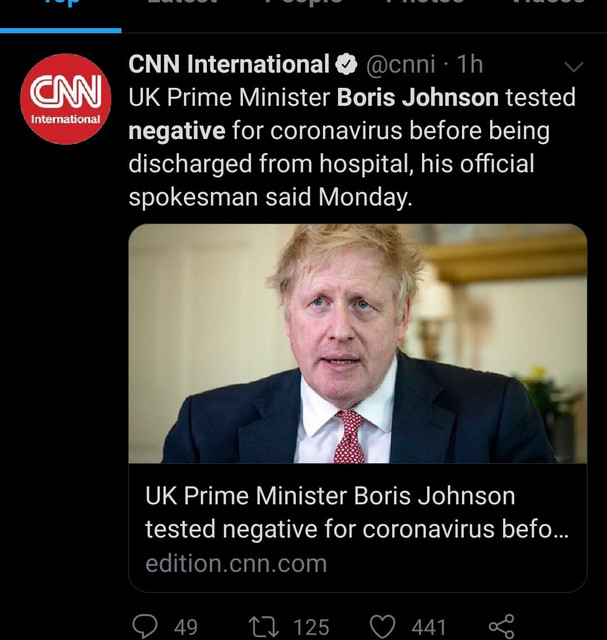 Second article is worrying and infuriating at the same time: 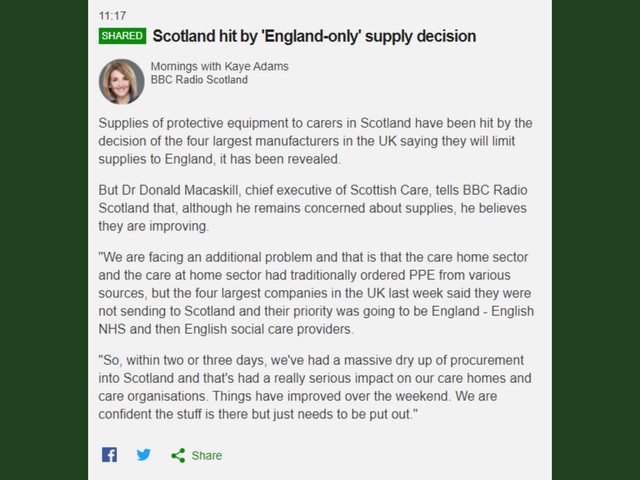 Nearly half the deaths from covid here in Canada have been in long-term care homes. Heartbreaking and infuriating case in Quebec where the residents were pretty much abandoned *sorrow* I never want to get old here...

Well, you know the most about medical procedures Aggie! I did a quick Google and apparently BoJo’s negative test was required in order for him to be discharged; I’m not sure how long patients normally stay positive after being admitted, or at what stage of recovery they normally stop testing positive.

That is annoying and concerning about healthcare supplies, yeah - obviously England has the bigger population and higher number of cases, but it should obviously treated as equal priority everywhere. I don’t know if this is another situation with Scotland being disadvantaged by the Tories again, but it looks bad.

And K, that sounds horrible about the care homes! Negligence has been an issue in some care homes here at times, but nowhere near that bad AFAIK. Extremely sad.

It’ll be a long time before you have to worry about getting old, but if you wanted, there’s nothing stopping you moving to Scotland in the future! LOL

Lion, if he was in ICU he was severely ill. According to the WHO it takes 14 to 56 days to recover from severe infection. He was admitted to hospital/then ICU/then recovered and tested negative in 8 days. And he left the hospital on Easter Sunday, just like Jesus.... he is a miracle! /sarcasm/

Also, they can only be discharged after they have had no temperature for 3 days minimum and they require two negative tests taken (at least) 24 hours apart. He was in ICU for 3 days.... something doesn't add up. They are lying somewhere. EDIT TO ADD: I read a study in China where four healthcare workers tested positive, were hospitalized and still tested positive 13 days later, 13 days after they had no symptoms and were ready to be discharged (I can look for it if you want).

And it's disgusting that they are leaving people in Scotland without PPE, it doesn't matter whether England is bigger, they should split equipment equally. English people are not worth more than Scottish people. If we run out of PPE, care homes staff will stop going to work and the elderly will die by the dozens like in Spain.

Wow K, that's horrible.... I wonder if the staff abandoned the care homes because they stopped supplying PPE, which is what happened in Spain too (and what will happen to Scotland if England keeps all the material as they are doing now).

Thanks for the clarification Aggie, I figured you’d know the lowdown on whether his time in hospital made sense or not!
Wow, this gets even more intriguing now!

Yeah, they should use his blood serum to save humanity... lol 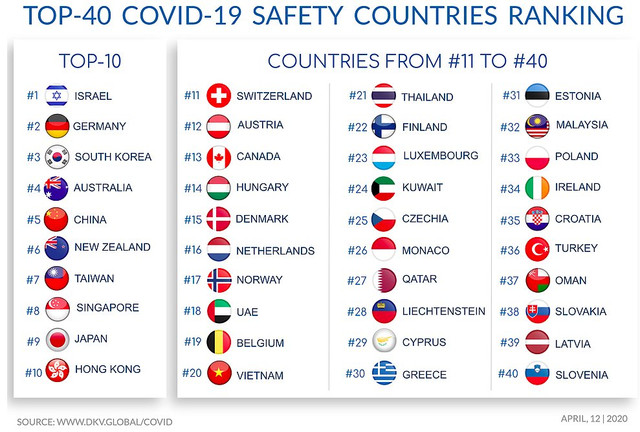 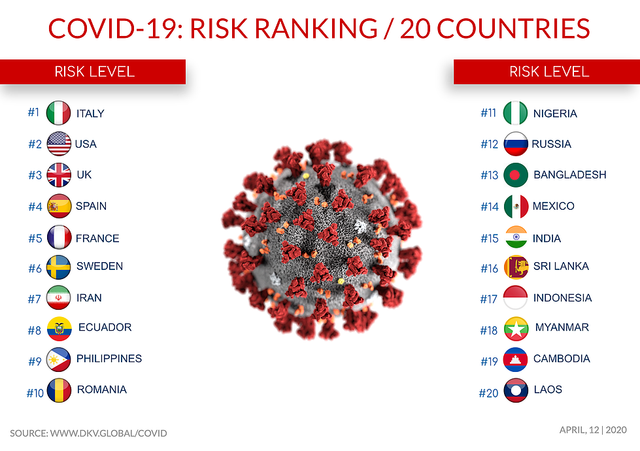 LMAO!! Your last two posts have literally made me LOL on sight!
I’m thinking two things: You’re at your best when taking down politicians, and remind me never to get on the wrong side of you... Like, ever! LOL

And those charts are great! Quite scary to see that the UK is so high on the unsafe list though :-/