I agree Len, the democratic party is to blame, if they had chosen Bernie instead of Hillary this wouldn't have happened.

Rogue, same here: never the UK has been more un-united.

I have a feeling that Trumpy won't make Pressie. Something will happen between now and the swearing-in.

He has five sexual assault cases against him including one of a rape of a 13yr old girl. The latter is due to be heard next month.

I'm not sure what happens in that situation, prpbably Mike Pence will become King?

Can you fill us in Len?

Here's why he got in!

Seriously though he connected to the rural poor and talked about jobs, Hills just talked in general terms about more of the same. She forgot the buzz phrase coined by her hubby: "It's the economy, stupid!"

Not sure how much will actually stick to Trump, he is a 1%-er.
_________________
Warning!: Those who knock on Dragon's doors un-announced may be flame broiled, unless they bear chocolate/wine, or good foods

Hill and Bill became rich from the time they started in politics in Arkansas and I am reminded of the quote from Harry Truman, "Anyone who makes money from politics is a crook!"

@Rockhopper wrote:Hill and Bill became rich from the time they started in politics in Arkansas and I am reminded of the quote from Harry Truman, "Anyone who makes money from politics is a crook!"

It ain't over yet! now they want Chelsea to make a political run,,,,,Just wish they would realize no one wants them and go away and stop trying so hard to be in the WH again.
_________________
Warning!: Those who knock on Dragon's doors un-announced may be flame broiled, unless they bear chocolate/wine, or good foods

The problem is really just beginning because a lot of what Trump ran on is not and cannot be implemented. The people who voted for him are going to watch him like a hawk and hold him to his word. Second, I can't see trump making war with Russia, however the opposing side wants a war. There seems to be a danger period for something to happen between now and inauguration date. There is also the problem of someone trying to kill Trump, this could spawn internal crisis. On the other hand Trump told us the elections were rigged and I believed him but it was rigged for him to win. I do believe it all makes sense now and none of it looks good. We will have to see what happens because Trump is already backing away from some of his promises like killing Obama care, and softening his stance on immigration.

Yeah Len I see that the Clinton Clan are pushing Chelsea. Don't they realise that no-one wants them anymore?

I also agree Star, I guessed that Trumpy would back away from his megalomanical shoutings. The man is another P.T. Barnum!

So far there have been several surprises out of the election.

For the Greens: More voted Green than in 2012, sadly not enough to push her to 5% needed for Federal funding. But Ranked voting is now in several states, as well as legalized marijuana, 1) that saves on arrests/trials/incarcerations, 2) Tax revenues have allowed the legalizing states that went first to make enough to offer free tuition to state dwellers, and possible state run single payer health systems, (Those who killed that idea in Colorado will lose their seats as that was political suicide for them.

For the World: NATO is now on hold, and Russia is breathing easier with less Nuclear drills for their populace. TPP seems to be dead.

America: Trump has had vows from Bernie and Elizabeth to work with him as adults in helping the nation. Trump has decided after a talk with Obama to NOT adopt the Paul Ryan plan of vouchers for medical coverage.

BTW: Paul Ryan is a cold hearted, special snowflake Sociopath who needs to go as well.
_________________
Warning!: Those who knock on Dragon's doors un-announced may be flame broiled, unless they bear chocolate/wine, or good foods

Trump has picked Reince Priebus as his Chief of Staff. Priebus is the head of the GOP.

His selection for Chief Strategist and Senior Counsellor might be concerning. Stephan Bannon is an executive with Breitbart news... very alt-right and white supremacist.

It needs a serious shake-up there. The gerrymandering that has given the Reps. a hold on Congress has to be dismantled. Most western countries have independent committees who decide the electorial boundaries not the party in power.

Yeah Ka, Bannon is a piece of cesspool slime and Priebus is almost as bad. Trumpy will have some problems with Israel because Bannon is virulently anti-Jew.

I agree Len, Paul Ryan and Ted Cruz both need to be ejected forcefully. Both are diseases on society. According to Raf Cruz, son Ted is ordained by god to be pressie but in this last election god was busy with all the souls flowing in from Syria.

One of the biggest problem for Trump is who he chooses to surround himself with. He himself does not have enough experience and knowledge so he will not be able to trust what he thinks and so end up taking ideas he cannot test for himself. At the moment he is putting together people who he trust and not necessarily the right people. On the other hand people are going to rebel no matter what he does. 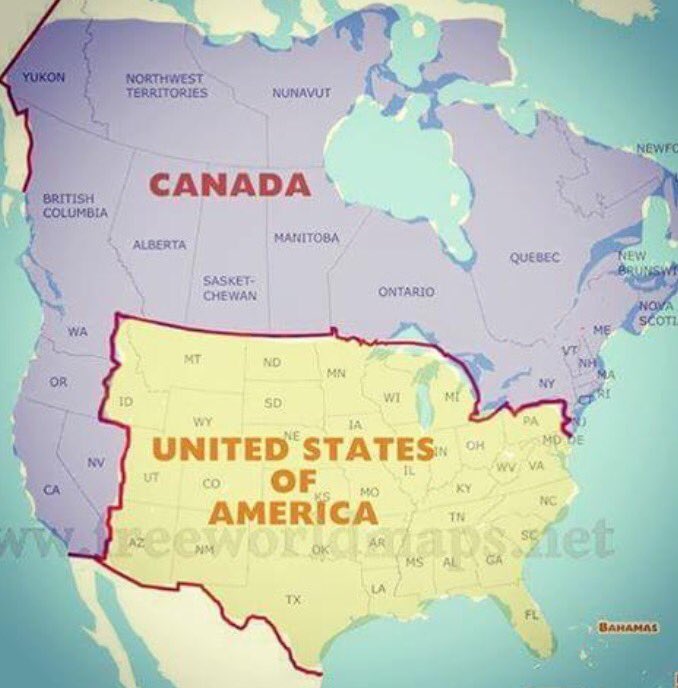 Are you saying annexing part of America will help? I am not sure anything will help.

If that map became reality, we would all save up to get back to the west coast. I like Oregon when I lived there.
_________________
Warning!: Those who knock on Dragon's doors un-announced may be flame broiled, unless they bear chocolate/wine, or good foods