@Agartha wrote:Covid being a seasonal virus is not good news, not good at all as it predicts an unpleasant Winter for us in the Northern Hemisphere as we have colder tougher cold seasons. We can see the numbers have risen in the Southern Hemispheres where Winters are not as cold and not as long.... if numbers rise I predict schools will not stay open as normal for long.

Yes, it makes me feel like(Unless a vaccine can be made ready very quickly) what we’ve been experiencing recently with the falling numbers has been a false dawn.

I always believe it’s best to look at these things from a worst case scenario - out of realism rather than pessimism - and it does look to me like we’ll need to increase lockdown back to pre-Phase 1 levels in the UK as winter hits this year, if we want to maximise our chances of staying safe.

I'm really not convinced of it being seasonal. The outbreaks are equally bad all over the world no matter what season it is. I don't doubt it might develop into a seasonal virus once it is somewhat controlled. Currently how the community infection pass-on rate is controlled is the only way to avoid this getting worse, not the season imo. Lockdowns, masks, social distance, cleaning these things will all need to stay in place for a very long time. However, many places are trying to get rid of these restrictions asap. There's really no logic in that imo.
_________________
................

While it’s still too early to definitely say one way or another, since we’re still less than 1 calendar year into the pandemic(First suspected case 17/11/2019 and first confirmed case 1/12/2019, if I remember right), the evidence of the virus being seasonal is starting to mount up now, and I think the report shared via the app has been very well researched and put together. (Obviously it focuses on the situation in Europe, but there’s no reason why that shouldn’t apply to everywhere else too.)
The outbreaks in warmer countries have generally coincided with their coolest times of year - including southern Australia where it’s currently winter, obvs - contrasting with Australian summer, when numbers stayed low.
The virus has, as far as I know, generally caused less severe symptoms and caused lower numbers of deaths per infection in the warmer conditions, but has still spread easily due to there being less careful following of the lockdown rules, more people being out and about etc.

It can be very difficult to see a pattern of any kind, as the virus’s behaviour is so unpredictable. But I believe there’s a pattern developing that it might be most dangerous in cold weather conditions. The Northern Hemisphere winter will provide more evidence, but obviously we need to try and preempt that rather than wait for it to happen and then react.

I totally agree that nobody should be disregarding the social distancing and handwashing measures etc, that would be crazy right now.
I think the quickest and best way to tackle this virus would actually be a program of complete elimination similar to what New Zealand has done - lockdown on steroids, so to speak - which would enable the virus to just die out completely by cutting off its chain of transmission. But getting that done on a worldwide scale would be... Difficult!

One positive article I’ve just come across(Posted today), RE development of a vaccine. (It couldn’t be linked so I screenshotted the entire thing to let you guys see it. Some parts are repeated but at least the whole thing is there... Hope it helps): 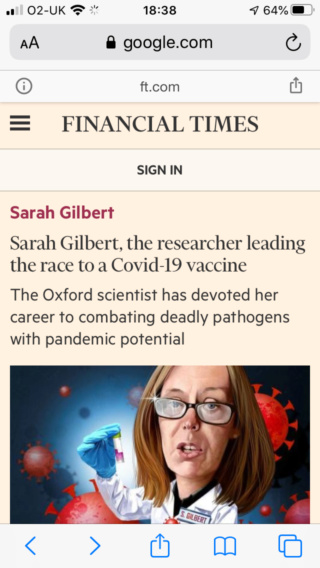 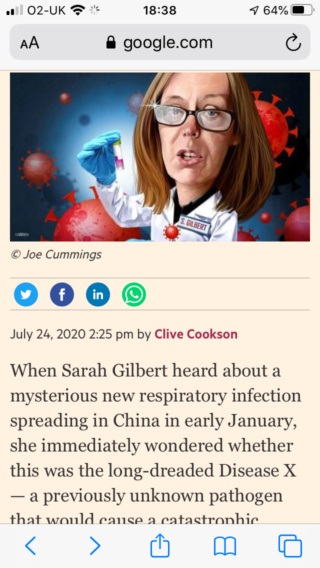 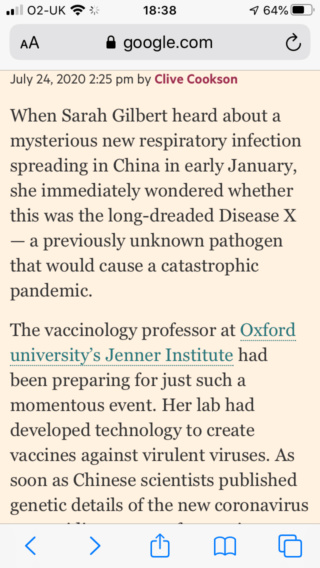 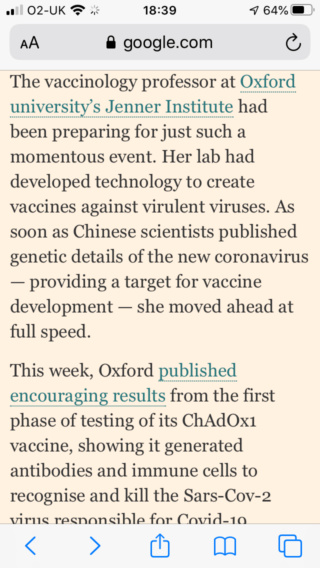 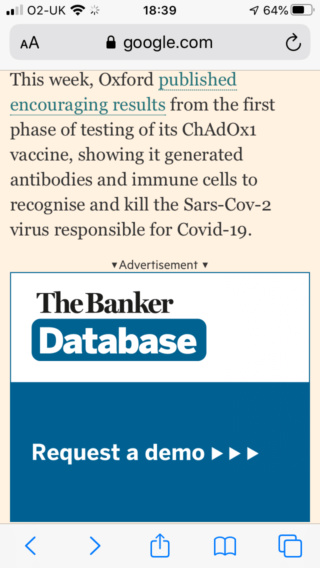 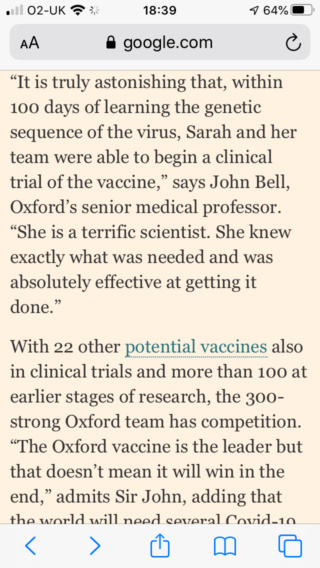 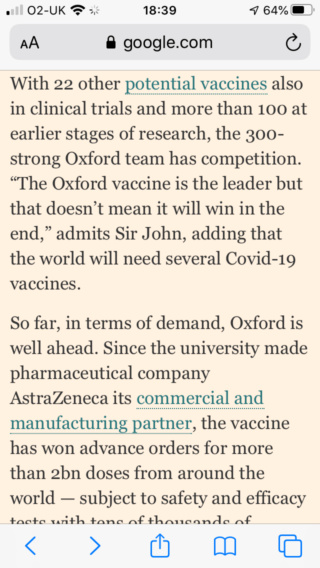 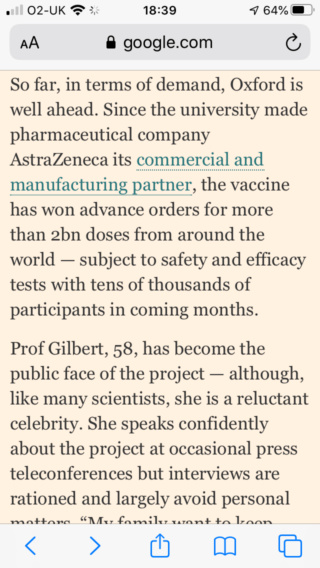 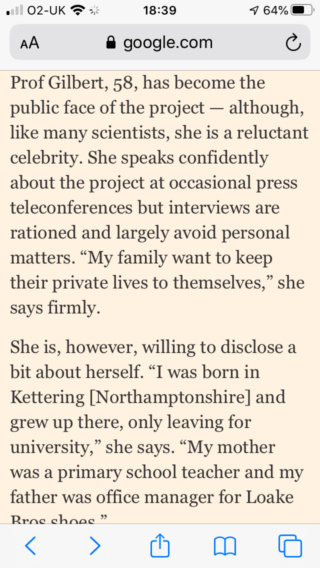 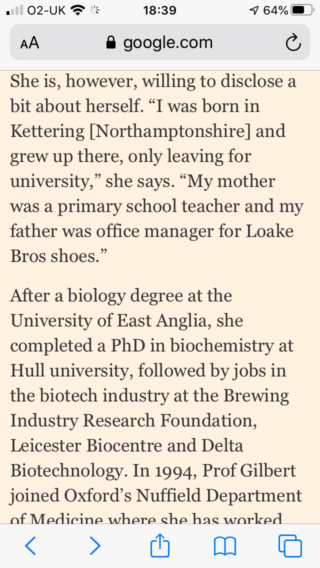 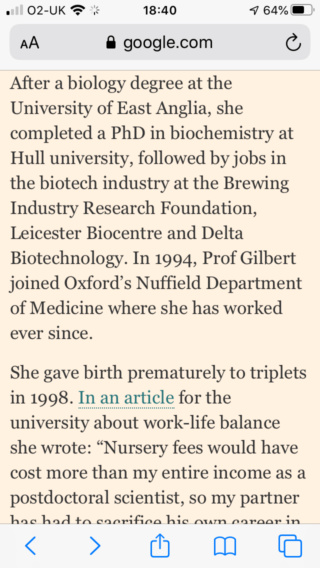 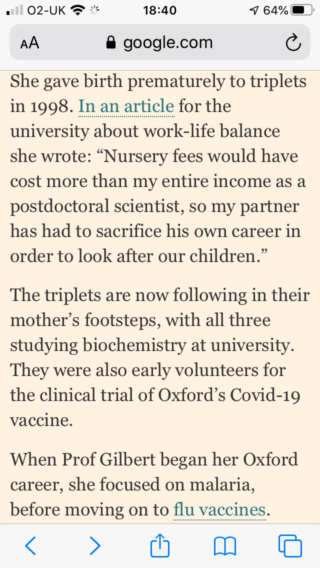 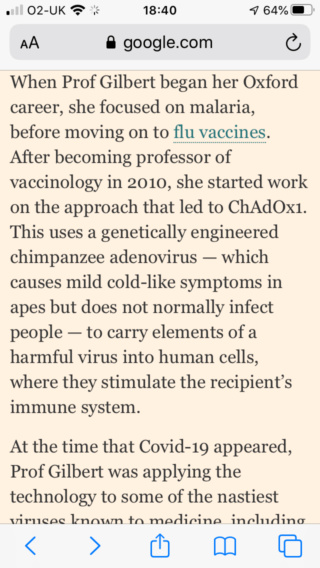 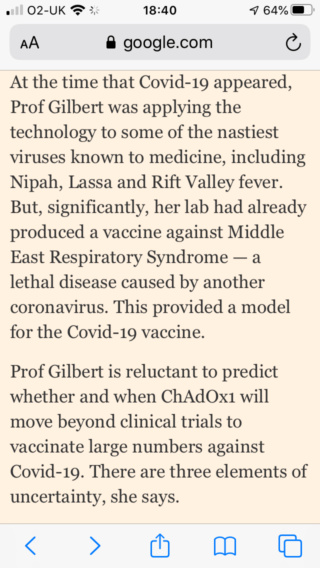 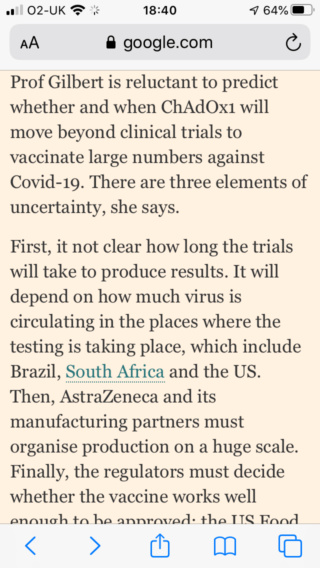 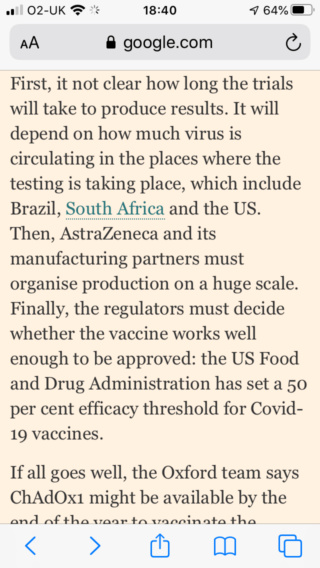 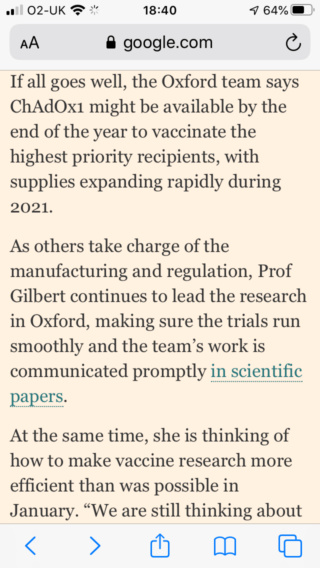 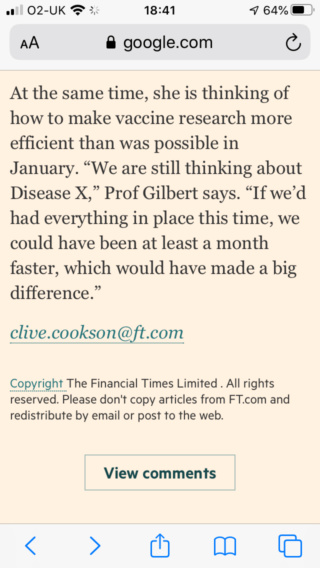 Meanwhile we still lead in corona deaths and the toll is still climbing. closing on 150k, and all because of tRump's not acknowledging it, or his attempts to obfuscate or deflect it, and his slow reactions to work on it, add in the Big Pharma trying to maximize profit from it, and the mass of idiot anti-maskers, (many who also are anti-vaxxers) slowing down recovery by their refusal to wear a damned piece of cloth or paper over their nose and face, heck some leave their noses hanging out! 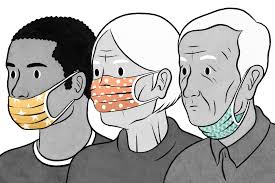 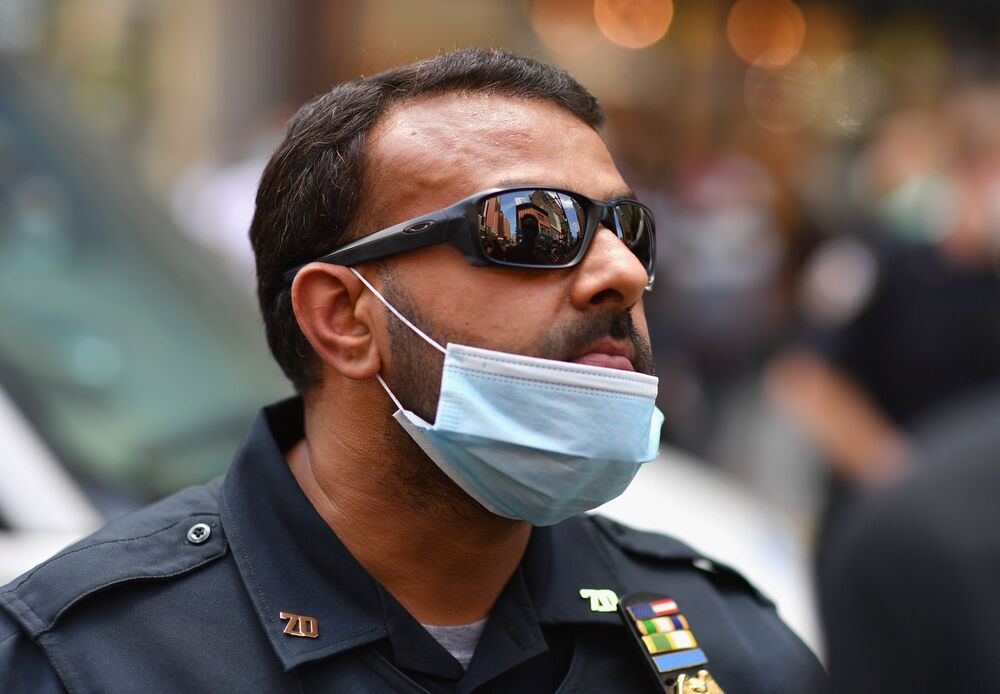 And of course out shopping for food supplies with folks like that, and the ones who flat out refuse to wear masks at all!

I just read the FT article you posted, Lion, and wow! What a woman and what a family! Her children volunteered for the clinical trials... amazing.

I trust their vaccine will be safe and the sooner is out the better.

That’s exactly what I thought, she seems like a total legend! And her own kids volunteering to help trial the vaccine must mean that it’s safe, and the trials getting to the stage they have must mean the vaccine is effective. I thought the article was very reassuring as well as enlightening.
Hope this vaccine gets the green light soon!

Last week scientists published an article saying they think the virus is seasonal. Now the WHO has said it is not:

The World Health Organization described the COVID-19 pandemic as “one big wave” and warned against complacency in the northern hemisphere summer since the infection does not share influenza’s tendency to follow seasons.

Oh wow, still so much conflicting info on it! Time will tell for sure I guess.
Its behaviour is so hard to figure out! Part of the reason I find it so scary ever since I clocked the severity of the pandemic.

Ags article reminded me of our earlier concerns here in Oz regarding the seasonal influenza outbreaks, however there has been next to no flu this year (so far). The main reason for this is all the things put in place for covid (and a higher vaccination rate) has meant the flu hasn't been able to take hold. One good thing I suppose.
_________________
................

Lion, exactly that: we are all getting contradicting information depending on who is talking! At work we are guided by public health and PH Scotland works with the WHO, so we generally go by their advice. But online you find articles from scientists whose opinions (and studies) are totally different.

Rogue, I guess that's one of the good things about isolation and masks: they do keep pathogens at bay. This is why in Oriental countries they use masks even when they have a cold, to protect others (as much as possible of course).

That’s an interesting point about people in the Far East wearing masks to protect themselves and each other. I remember seeing this on news coverage etc in the past and thinking it was over the top to go to such lengths, but now it turns out they’ve actually been very smart and probably ahead of their time.

Yeah, good point RE the pollution - I remember seeing news reports showing people in China wearing face masks in the past due to smog and reduced air quality.

That really does sound promising, and I like the catchy no-BS name it’s been given! I like how positive the project leader is sounding about wanting to use it straight away too.

Disappointing that the Australian Government seems not to have been more keen to fund it.

So now we have 1 vaccine that has (limited) approval already but will only be used with Chinese soldiers for the time being.

That’s awesome, didn’t know there were that many vaccines! I’ve been following the progress of the AstraZeneca one and concentrating on that TBH, as it looked to be the quickest one to be developed and the first one to get manufactured. That’s great that there are so many others!

I’d imagine that as time goes on and these vaccines(Hopefully) pass the tests and get mass-produced, eventually the teams and companies responsible for them will combine the best parts of the various vaccines to refine them into one which offers even greater protection.

I’m guessing that might be how they might seek to improve and strengthen the vaccine(s) once they’ve produced ones which are proven to work on the general population, but I dunno. Pure speculation on my part!

Also, I imagine that once they have a vaccine which works, producing a new vaccine if the virus mutates won’t take nearly as long, and the original vaccine should still offer a degree of protection against the mutated virus, due to the similarity between the mutated one and the original.
(Hopefully not something which will be a particularly major problem in this case anyway, since Covid-19 is supposedly a slow-mutating virus.) 🦠